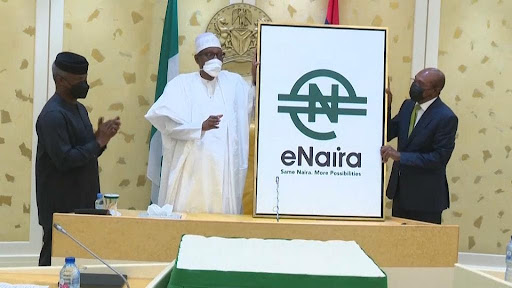 The fourth industrial revolution has lead to Africa’s first Central Bank Digital Currency (CBDC). Central banks around the world are preparing to develop digital versions of their currencies, known as CBDCs. This is in reaction to the evolution of online payments and also in a bit to compete with cryptocurrencies that are beyond the control of governments and global regulators.

In 2020, China became the first major economy to launch a test version of a digital currency. Five countries have launched their virtual currencies since then. According to the Atlantic Council’s CBDC tracking project, about 14 nations including South Korea and Sweden are in the pilot stage of their virtual currency development. In West Africa, Ghana is also planning to launch her own CBDC soon.

Nigeria finally launches her CBDC, three weeks after its scheduled date – October, 1. Based on a study from Statista in 2020, Nigeria was ranked the third largest user of virtual currencies in the world after the United States and Russia. With cryptocurrencies, Nigerians majorly aim at escaping the reoccuring depreciation of naira.

Earlier in 2021, the Nigerian central bank tried to take control on the use of cryptocurrencies. Banks were ordered to close accounts that were engaged in such transactions. But the ban didn’t stop many Nigerians from sorting ways of using cryptocurrency for overseas transactions.

The nation’s digital currency was scheduled for launch on October 1 but it was shifted. According to Nairametrics, the unanticipated surge in visits on the website of the Central Bank’s eNaira initiative led to the sudden postponement of the launch. In the launch of the eNaira, stated the digital currency will advance the extent of payments system – making financial transactions easier. It was also stated that the product was put together following many years of research. Issues around cashless policy, National Financial Inclusion strategy, Bank Verification number, Shared Agent Network Expansion Facility, License categorization for the Payment System and Establishment of NIBSS Payment Infrastructure, were all carefully considered.

Mr. Godwin Emefiele, the Governor of the Central Bank of Nigeria, CBN, mentioned that there has been overwhelming interest and encouraging responses from Nigerians and other persons across the world since ever since the eNaira platform went live. He said there has been over 2.57 million daily visits to the platform.

33 banks are fully integrated and are live on the platform already. The governor also stated that N500 million had been minted successfully by the banks with N200 million been issued to financial institutions. In addition, over 2,000 customers were already on board. As such, CBN has declared that no one would be allowed to own more than one wallet.

The CBN has revealed that all transactions conducted on the newly-launched digital currency platform would be free for 90 days. The regulator on the other hand stated that it would return to its guide on applicable charges by banks and other financial and non-financial institutions at the end of the 90 days. This was unveiled in the framework titled, ‘eNaira Circular and Guidelines’. The CBN  guide read in part, “The charges for transactions that originate from the eNaira platform shall be free for the first 90 days commencing from October 25, 2021 and then revert to applicable charges as outlined in the Guide to Charges by Banks, Other Financial and Non-bank Financial Institutions. MDAs may collect revenues or make payments in eNaira.”

Nevertheless, many financial experts have said that the digital currency will not change or affect the value of the naira in the foreign exchange market. They also shred their concerns over the risk of cyber attacks on the eNaira accounts of Nigerians.

The president, Muhammedu Buhari has declared that introducing the eNaira digital currency will enable the government to send direct payments to citizens eligible for specific welfare programmes as well as foster cross-border trade, stating that the currency and its underlying blockchain can increase the country’s Gross Domestic Product, GDP, by $29 billion in 10 years.

The digital currency is expected to foster economic growth through easier access to capital and financial services. It would in turn increase economic activities at low/no interest transaction rate. eNaira is expected to provide secure and cheaper oversea payments or transaction options. As a result of the traceability of the currency, it is more difficult for individuals or organizations to be involved in fraud.

For businesses and business owners, the eNaira payment option is expected to make payment for goods and services easier such as in-store payment using their eNaira wallet by scanning QR codes, thereby fostering customer return. Customers can also move money from their bank account to their eNaira wallet with ease. Individuals can monitor their eNaira wallet, check balances and view transaction history easily. Fortunately, the platform allows users to send money to one another through a linked bank account or card.

Conclusively, with the eNaira, oversea payments are expected to become safer and cheaper. Also, people can cut down the queues to pay taxes and bills easily at their convenience and from the comfort of their homes. The CBN further guarantees that financial government aids will get straight to the people, eliminating the middle men and those that con claim these funds directly. Compared to fiat, the eNaira digital currency has a much lower cost. There are no charges for daily transfers between accounts, which is a great incentive. This elimination of transaction fees lowers the cost of doing business as there’s a corresponding increased security.